The 10 best walks from Tarn House

During the three years we’ve owned Tarn House, I like to think we’ve done most of the walks that are possible from the front door. In reality, when a spare day comes around, I’m always surprised to find a new path or track that takes me to an unexplored woodland, tarn or crag. This caveat in mind, here’s a list of my top ten circular walks from the Tarn House front door – from gentle rambles to full-on expeditions. Most of the walks are available as laminated guides (with maps) in the Tarn House info pack for guests to enjoy during their stay. 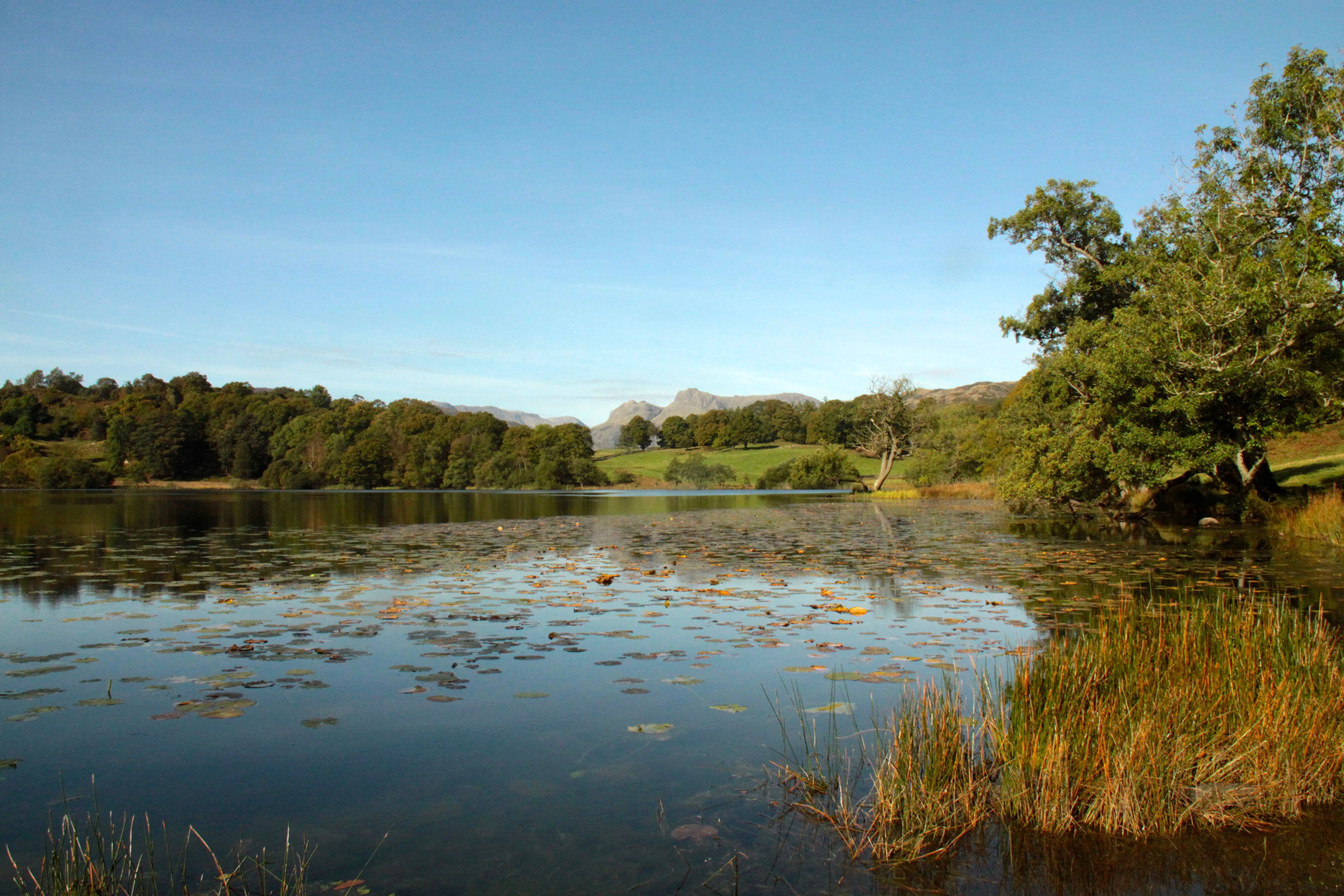 Loughrigg Tarn is the tarn that gives Tarn House its name. A favourite haunt of Wordsworth – who thought it ’clear and bright as heaven’ – the tarn nestles in a gently-sloping bowl framed by the iconic Lansdale Pikes. Loughrigg Tarn comes alive in early summer when lilies break the surface, kids can paddle along the pebbly south shore and wild swimmers dip through the waters where the minnows jump. This is the shortest there-and-back walk of all, clocking in at less than a mile – simply go down the Tarn House drive then fork right, along the lane, for five minutes to reach the tarn.

For an introduction either to fell walking generally, or to this area of the Lakes specifically, Loughrigg Fell (1,101 ft) is a delight. It was the first Wainwright for the kids in our family – bribed by Club biscuits at the summit. The circular walk from Tarn House makes its way up Loughrigg Fell’s rarely climbed northeast shoulder before meandering downhill between crags and bluffs into the paddocks behind the house. Like many of the smaller Lakeland peaks, Loughrigg Fell has an unbroken 360 degree panorama of fell and lake, including a striking full-length vista of Windermere and superlative views over the Langdale Pikes and Fairfield Horseshoe. If you want the fell (and its amazing photographic opportunities) to yourself, rise early and catch sunrise from the summit. Be back in time for breakfast – with a spring in your step. 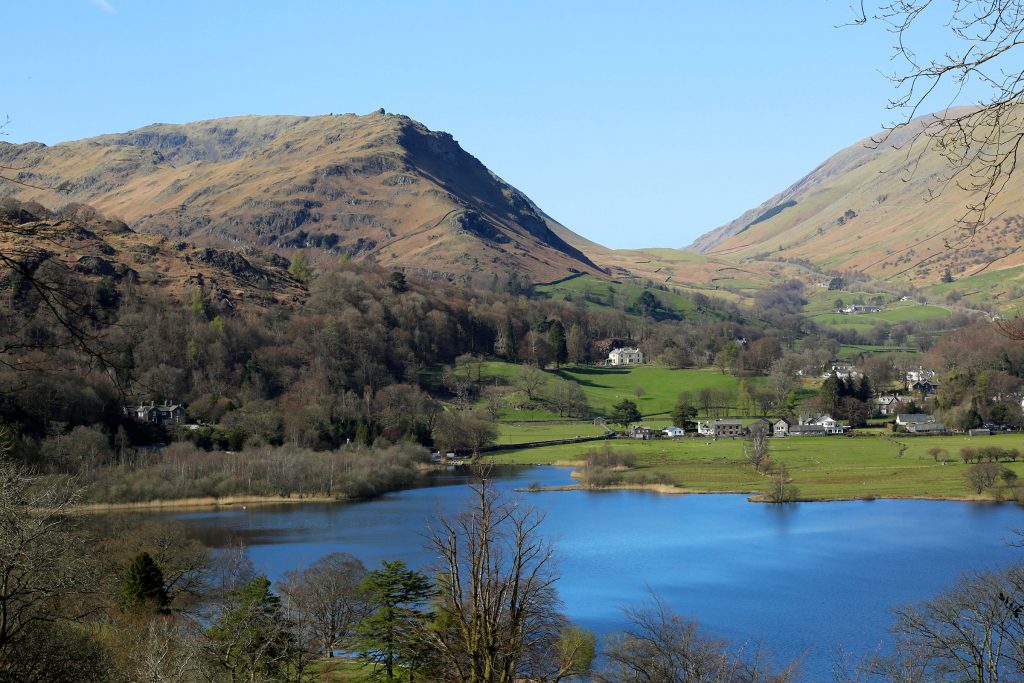 One of the most popular rambles in Lakeland, the Loughrigg Fell circular takes in the infamous Loughrigg Terrace, with its views over Grasmere vale to the rising Lion and Lamb behind. Children will delight in the gaping chasm of Loughrigg Cave – rumoured to hold the population of Ambleside (though in what event it would be needed I’m not sure!). Spring and early summer give the walk even more magic – snowdrops give way to daffodils then cloaks of bluebells and foxgloves on the slopes that the Romantic poets once wandered. 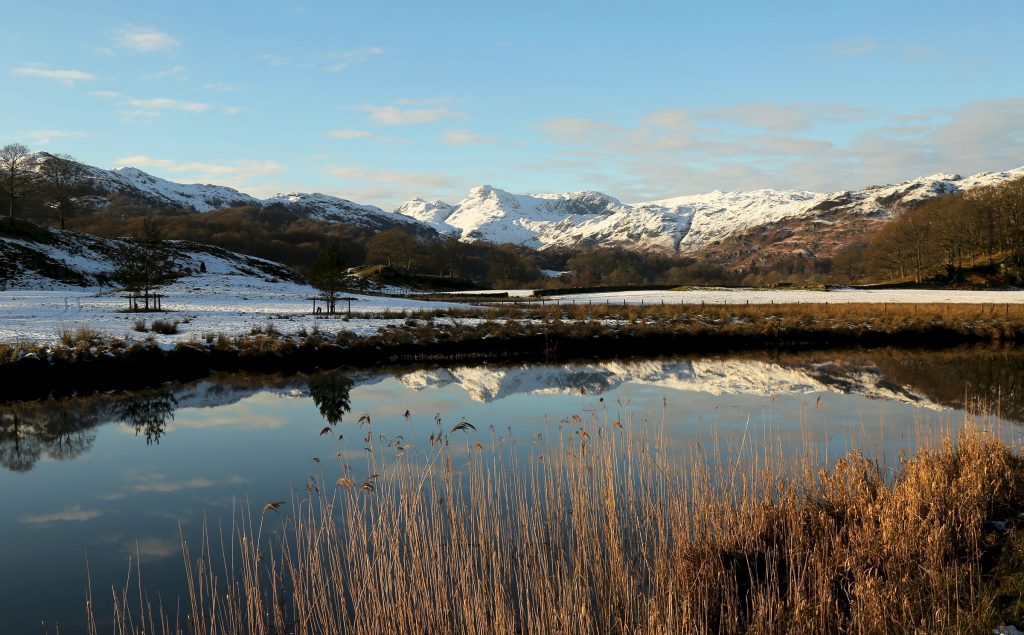 My favourite low-level walk from Tarn House, offering a sublime mix of ancient woodland and secluded paths, rivers and tarns. From Tarn House, pass by Loughrigg Tarn then drop into Low Wood – a gem of a woodland that lies just a few hundred yards from Elterwater, but which is rarely visited. In spring bluebells carpet the woods. At dusk listen for owls and watch for roe deer. Descend through the trees to Elterwater village for a pint on the village green. The return route is along the infant Brathay to Elter Water, a gentle ramble in the presence of swans and – if you hang around long enough – otters. Round off the circuit with coffee and cake at Chesters by the River. 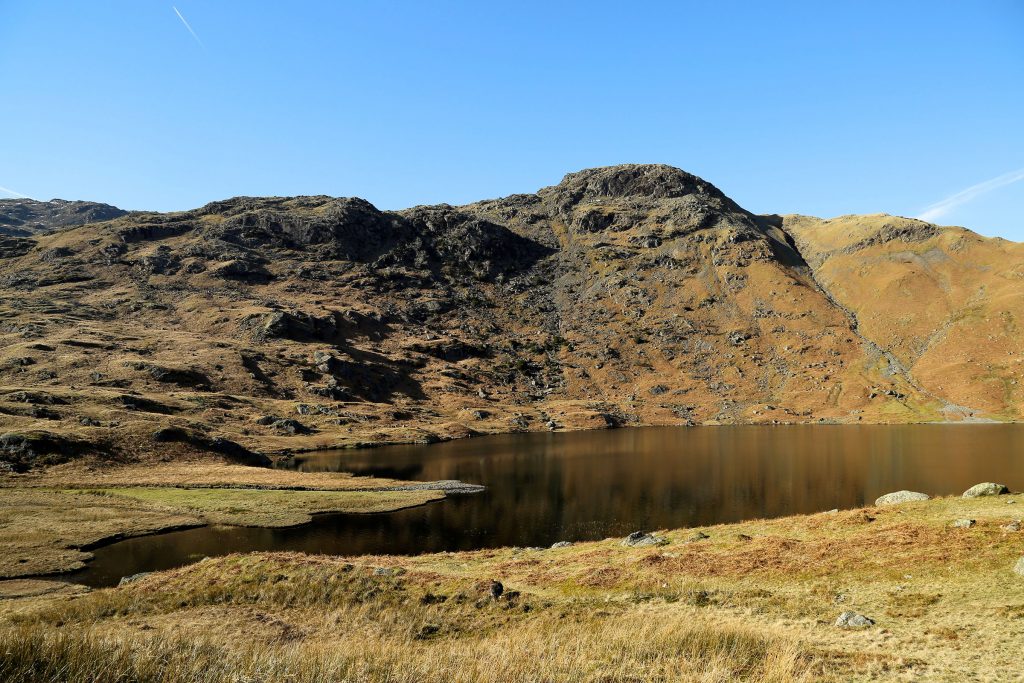 In Victorian times Easedale Tarn – the gem in Grasmere’s crown – was so popular that an enterprising local built a refreshment hut at the tarn’s outlet to service the hordes of visitors who made the short climb alongside Easedale Ghyll. Now Easedale Tarn is the territory of herdwicks, ravens and walkers with a taste for quiet places. The route to Easedale is as enjoyable as the tarn itself. Ascend to Red Bank via Loughrigg Tarn then climb onto the Silver How ridge, summitting the airy Wainwright summit (1,296 ft) before dropping north to the tarn immediately before the rocky lift to Blea Rigg. Return by way of Grasmere and Rydal’s coffin route for a splendid day out that deserves at least one slice of Grasmere’s celebrated gingerbread.

With eyes trained on the northern peaks of Langdale, it’s easy to forget the rolling expanses of pastoral land south of Tarn House – the meadows, lanes and woodlands between the Brathay and Hawkshead that offer peace on even the busiest summer day. For a walk on the pastoral side, head east over Loughrigg Fell, skirt Todd Crag with its celebrated Windermere panorama, cross the Brathy at Clappersgate then wend by the back lanes to Pullscar Plantation, from where a grassy ascent of Black Fell (1,056ft) opens one of the best vistas of lake and fell in the area (pictured above). Return to Tarn House by way of Skelwith Force. 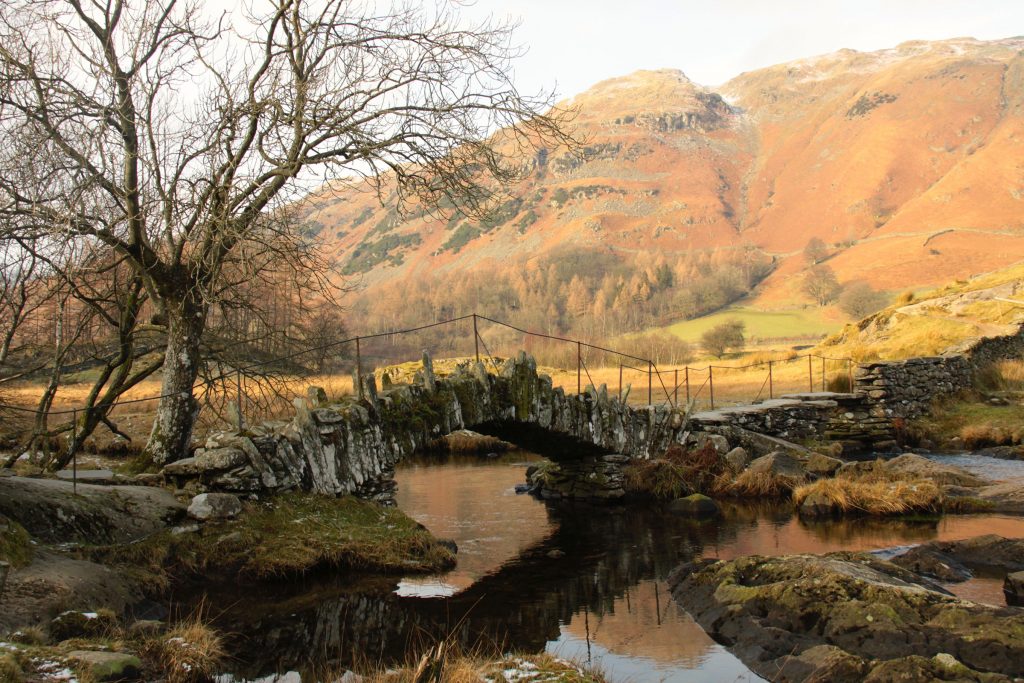 There are dozens of variations of this 6 1/2 mile circular in guidebooks: a much-loved lakeland classic that follows the River Brathay’s woody upper stretches, taking in the waterfalls of Skelwith and Colwith Force before crossing Little Langdale’s famous packhorse bridge and returning to Tarn House via  Elterwater. A fantastic way to explore the two Langdale valleys on a walk that offers plenty of refreshment options and is kind on even the tiredest limbs. 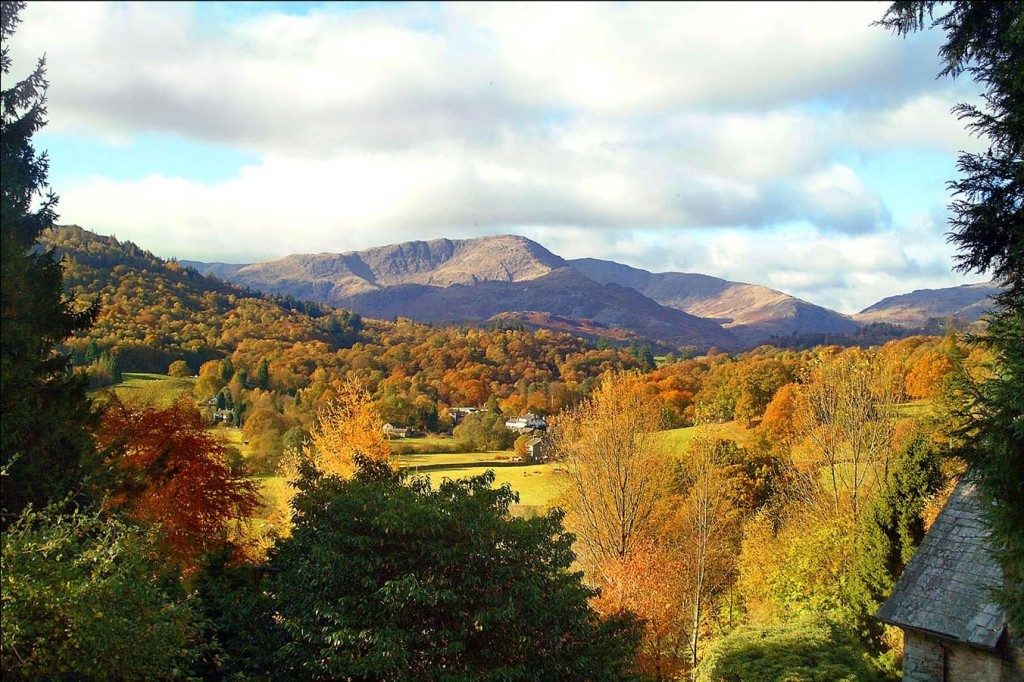 The best of the high level walks from Tarn House, which climbs the superlative peak that dominates the view from the Tarn House garden. Extend the waterfall walk by heading west before Slaters Bridge into Tilberthwaite to climb Wetherlam (2,502 ft) via scrambly Wetherlam Edge (great fun!). From the summit, continue southwest across Black Sails to the peaked summit of Swirl How (2,630 ft), then down via Great Carrs (2,575 ft) and along Wet Side Edge to rejoin the waterfall walk at Slaters Bridge. Adventurous souls, or those who’ve ticked off their first round of Wainwrights, might choose to ascend Wetherlam via the arret of Steel Edge – a route Wainwright missed. And if you’re bagging, Grey Friar (2,536 ft) is a delightful grassy there-and-back from the rusting plane wreckage on Great Carrs. A grand day out.

9. The Langdale Pikes via Silver How 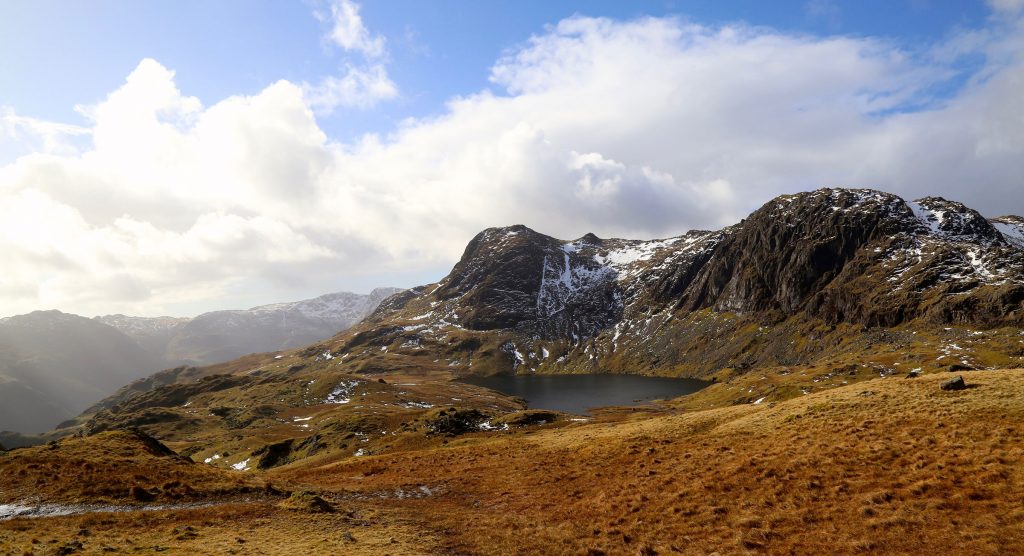 One for energetic walkers and a long summers day. Gain the Silver How ridge by way of Red Bank then continue west over Silver How and Blea Rigg before ascending the mighty cliff of Pavey Ark (2,288 ft) then airy Harrison Stickle (2,415 ft). Either tick off Loft Crag (2,270 ft) and Pike o’ Stickle (2,323 ft) to bag six fine Wainwrights in a day, or drop down into Great Langdale for a well-earned lunch at Old Dungeon Ghyll or NT Stickle Barn. The gentle return is along the valley base of Great Langdale, skirting the lower flanks of Lingmoor Fell before reaching Elterwater. The quiet glades of Low Wood take you back to Loughrigg. 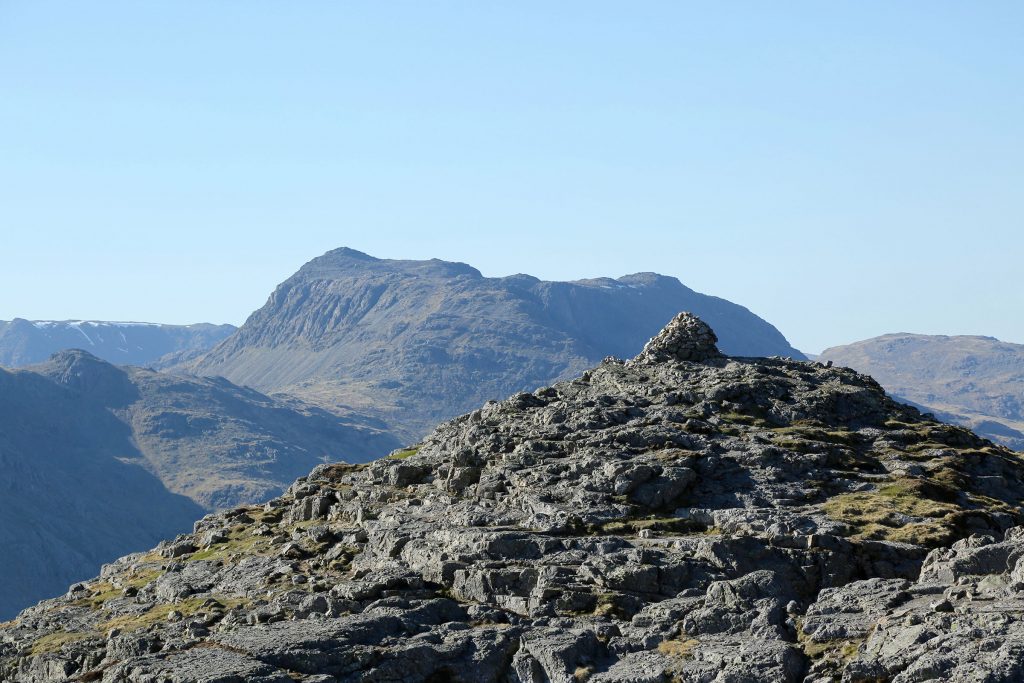 Full disclosure: I haven’t done this walk. But there has to be space for dreams, and plans for another day. The walk starts with an early breakfast at Chesters by the River (naturally). From there the waterfall walk is followed into Little Langdale, valley base for the first ascent of the day, Pike o Blisco (2,313 ft). From Blisco, a high level circuit of the head of Great Langdale begins, taking in Cold Pike (2,300 ft), Crinkle Crags (2,816 ft) and Bowfell (2,960 ft), before dropping  to Angle Tarn. The route picks up pace and excitement again as it skirts Mickleden along the ridge of Rossett Pike (2,106 ft). It then climbs steadily towards the Langdale Pikes and the summits of Pike o Stickle, Loft Crag, Harrison Stickle and Pavey Ark. The return leg is along the ridge eastwards, crossing Blea Rigg and Silver How to Red Bank. To finish the day in style, a final ascent of Loughrigg Fell awaits. If any Tarn House visitor ever does this walk in a day (photographic proof required 😉 ), I’ll buy them a pint.